After WWII abstract art became his focus. As he ventured away from realism his nautical art became more abstract and Princess was often the subject of his paintings.

Not limited to painting the sea, he loved painting horses, still lifes and nudes.

He succeeded in supporting his family with only his fine art career in a beautiful home in Key Biscayne, Florida. Although there were often times, while living there, that he felt he had been dragged away from a real chance at a fine arts career in New York City. So twice on their 18 years in Key Biscayne the family packed up and went back to New York, only to return to Key Biscayne a year later.

With his Princess in the backyard and a harbor nearby, he once again rebuilt the wooden boat he loved and on whom he eventually made it to the idyllic tropical island of his dreams.

As far as his painting was concerned, his style changed again in his later years. Maintaining the same abstract qualities of his earlier work, he moved into pointillism and the combination of abstract and pointillism proved magical. Lovers of nautical and abstract art now saw it in a whole new dimension. The pointillism injected a light and airy feeling to his paintings, making them almost lift off the canvas.

After his death in 1992 Joe Richards' daughter began preserving the paintings he gave her before his death. She had some of them framed that were stored in suitcases and boxes. In 2006 she began having the major pieces photographed by a Giclee studio in order to have them accurately reproduced in high-end Giclee prints on canvas.

Digital reproductions, so close to the original artwork these canvas prints are a treasure in themselves. Respected by galleries and museums alike, the giclee prints on canvas have been generally accepted by the art world and collectors of fine art. When placed next to the original paintings it is very hard to tell the difference between the prints and the originals. 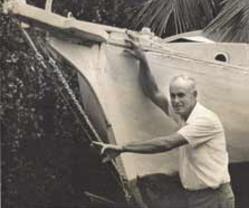 Born in 1909 in Yonkers, New York, Richards left home at 18 signing on to a freighter headed for India as an ordinary seaman. After returning to New York he pursued a career as an artist, having relative success with one man shows.

After returning to New York, Joe Richards pursued a career in fine art. His pre- WWII artwork was received well winning awards and one man shows from New York to Charleston. Much of the pre-WWII artwork was painted while he was sailing south from New York on Princess, his beloved Friendship sloop. 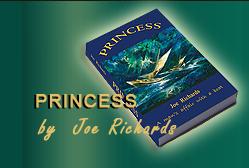 This block contains disable right click script. This block will not be visible on the live site.

The true story of a man's affair with a wooden boat. Read more about Princess by Joe Richards.

Purchase Princess today. “Princess” the true story of fine art artist Joe Richards' struggle to rebuild a 26' Friendship sloop in the pre-WWII era and then sailing her south from New York in search of an idyllic tropical island.